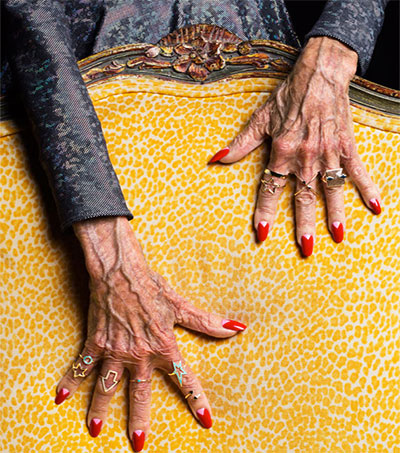 For New Zealander Walker, aged hands are something to celebrate, not to shun. “Hands can be every bit as expressive as faces, can speak of a life well-lived and they absolutely have their own stories to tell,” Walker says.

Sues is a former Ballets Russes star who celebrated her 90th birthday by going skydiving; Haze was a dancer on Broadway in the ’60s and still has the spunk to prove it.

Both models were photographed by Ari Seth Cohen, founder of the blog Advanced Style, which documents the sartorial choices of stylish seniors.

Sues and Haze were given creative license to style the jewellery as they liked for these pictures, so naturally, the models layered on the baubles. Walker’s jewels were made to evoke a feeling of everyday luxury, with a bit of a quirky spin. The arrow ring is a signature for the brand, while the mood ring (which reads love or hate, rather than having a stone change colour) is a cheeky fan favourite.

In 2013, the designer first partnered with Cohen to cast her eyewear campaign with Advanced Style-approved ladies, including makeup maven Linda Rodin. She explained: “The idea behind [that] eyewear campaign wasn’t about using older ladies or making a statement about age, it was about portraying optimism. The women in our campaign all have big plans and are passionate about life … As a result of the campaign we had a lot of ladies of an older age bracket coming to us and saying ‘thanks for making us visible.’ On the other hand, all the younger ladies were saying ‘I want to be like that.’”