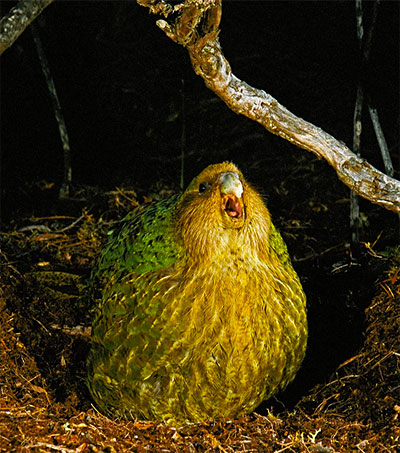 The kakapo, the world’s heaviest parrot, a critically endangered bird that only lives in a remote part of New Zealand, has had its most successful breeding season since conservation efforts began more than two decades ago, Nicola Toki reports for the Guardian.

Thirty-seven kakapo chicks are currently surviving, providing a much-needed boost to the population of 123 adult kakapo which live on predator-free islands.

The charismatic parrots, which were once thought to be extinct until a population of males and female was found in the 1970s on Stewart Island, reached their lowest number in 1977 at just 18 known birds.

Once found all over New Zealand, they were hunted first by Maori and then by European arrivals. The birds, cloaked in a rainbow of green hues, were so common that an early explorer described being able to shake a tree until they tumbled to the ground, like apples.

But after the introduction of predators such as stoats, ferrets and weasels, their numbers declined noticeably, and by 1840 they had disappeared from the North Island. The loss from the South Island occurred soon after.

“The chick numbers achieved this year are a real step towards a future that doesn’t involve the hands-on management of every single bird,” Vercoe said.

“Due to some huge improvements in technology in the kakapo recovery programme, we now have remote nest monitoring and smart transmitters that provide high quality data on what the birds are doing.”

“This is a turning point for us. These kinds of technological advances are enabling us to look after more kakapo in a non-invasive way, and as the population grows, these tools will be crucial,” she said.