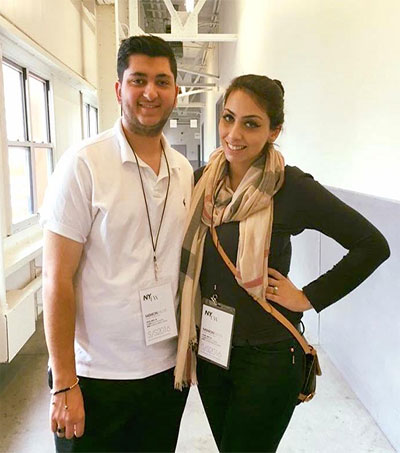 In a city identified for its style and statement, Melbourne is tough turf for designers. Home to style icons, it is hard to stand out and persist. But a woman of Kashmiri origin, 28-year-old New Zealand-born Julie Sufi is an exception.

The young designer (pictured with her brother) is the brain behind Brunswick-based label Belluccio, a brand that captures everything glamorous and gorgeous, according to weekly news magazine, Kashmir Life.

With a blend of a time and tradition, Belluccio has emerged as top choice in the Australian pageant industry for the Miss Universe and Miss World contestants. “Our gowns are often seen gracing Red Carpet events by Australian celebrities and socialites,” Sufi said. “We are Gina Liano’s top choice for her evening gowns, having designed her Logies gown earlier in the year, and will be designing exclusively for her during the second season of Real Housewives of Melbourne.” A style with a difference, Belluccio has been the official designers of Miss World Australia since 2011 for the evening gowns and national costumes.

Sufi said they have to work with the winner throughout the year. “Over these years, I have lost the account of how many dresses we have made. It must be hundreds if not thousands from 2011 to 2018,” she said.

She said the essence of her success comes from her family. Her father was a papier-mâché artist and her mother, a keen crewel artisan.

“It is something that my parents started and then I came and took over, pushed it a little bit further. Everything has fallen into a place where I am happy the way it is.”