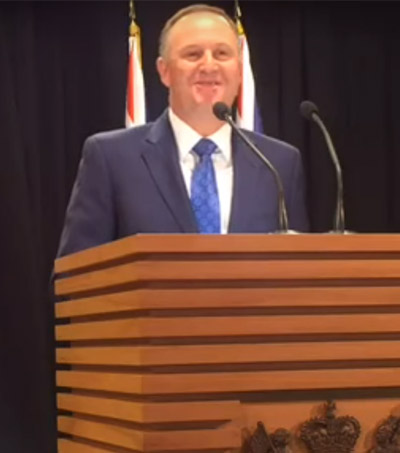 “New Zealand’s business leaders have praised retiring Prime Minister John Key for restoring pride in his people and for standing for a decade at the forefront of world leaders for his economic and ­social reforms,” writes Damon Kitney in an article for The Australian.

“His intellect, his management skills, his commonsense approach, his judgment, his interpersonal skills are unparalleled by any other holder of the office,” said Ralph Norris, Fletcher Building chairman and former CBA chief executive.

“Very few political leaders go at the time of their choosing. He has never been a typical politician and his departure is indicative of that. He goes at the height of his powers and leaves New Zealand with a set of economic statistics which are the envy of his inter­national peers. He entered politics to make a difference and get results. He has certainly succeeded.’’

New Zealand’s budget “is now in surplus and the economy is growing at 3.5 per cent. Government debt is at 25 per cent of GDP and falling and unemployment is now less than 5 per cent,” reports the article.

In a piece in the Spectator, Matthew Plummer writes: “He’s delivered stable, business-friendly government against a backdrop of the global credit crunch, and he ran deficits to shield New Zealand, a country heavily reliant on international trade, from the worst of the economic slowdown.”

Several other executives have stepped forward to endorse Key.

ANZ chief executive Shayne Elliott labelled Key one of the “great Western leaders of modern times”, and CBA chief executive Ian Narev praised Key’s “consistent, long-term economic policy”, which had been a hallmark of his government.

“In a world that has been on a huge political rollercoaster ride, New Zealand feels so stable. He has done a great job in making us feel we can have confidence. He has done his best to govern for all New Zealanders and as a party, to find the middle way,’’ said AIA Insurance chairman and former Telecom New Zealand chief executive Theresa Gattung.

David Kirk, a former All Blacks rugby union champion and the co-founder of investment group Bailador “said Mr Key stood out like a beacon in a world lacking political leadership and of cynicism towards politicians.”

“I regret such a strong and pragmatic leader for New Zealand and a highly regarded representative for this part of the globe has decided to leave public office,’’ said Geoff Babidge, managing director of The a2 Milk Company.

Trans-Tasman Business Circle CEO Johnny Weiss pointed out how Mr Key was able to resonate with everyday New Zealanders and “take the people with him”.

“He gave the people self-belief and pride. We are now perceived by Australian businesspeople, who come to visit, as innovative, smart and nimble”.

Key will tender his resignation to the Governor-General on December 12 and “has indicated he would support Finance Minister and Deputy Prime Minister Bill English as his successor,” as reported in the article.