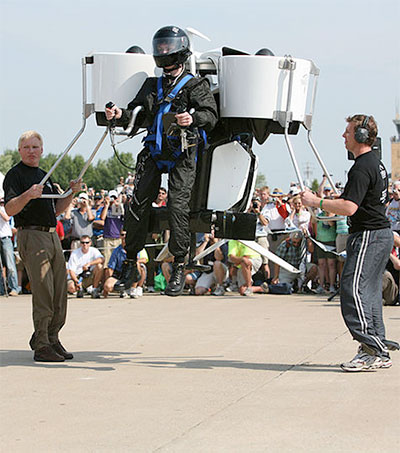 New Zealand jetpack manufacturer Martin Aircraft Co. Ltd. is looking to raise up to A$25 million through a December listing on Australia’s securities exchange. The money will be used to fund further development of its jetpacks — described as “motorcycles in the sky” and designed to carry people or objects at up to 7000 feet in the air at speeds of 50 miles an hour.

Martin Aircraft plans to offer between 20 million and 50 million ordinary shares priced at A$0.50 through most of November, ahead of a 8 December listing. The company is expected then to have a market value of somewhere between A$97.6 million and A$112.6 million, according to the prospectus.

The idea was dreamed up more than 30 years ago in a garage by Glenn Martin, whose longing to produce jetpacks was fueled by the 1960s US space program and animated TV shows such as The Jetsons.

Christchurch-based Martin Aircraft already has permission to fly jetpacks in New Zealand – where it is considered a “microlight” aircraft – and is busy seeking regulatory approval to enter markets further afield, particularly the US.

The first batch of Martin Aircraft’s jetpacks, slated to go on sale in 2016, have been designed for emergency services. The so-called First Responder Jetpacks will cost about US$200,000 each, the company says.