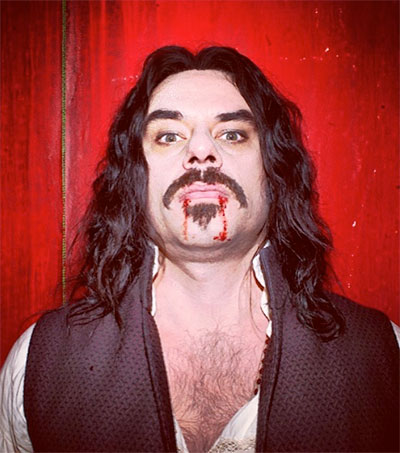 Being a vampire wasn’t entirely new to Jemaine Clement, co-director and star of What We Do In The Shadows. His first credited role was playing one in a 1995 horror short film called Blood Suckers.

Clement was willing to change his character to fit the evolving shape of the film.

“I was going to make Vladislav more mad and unpredictable when we set out, but Johnny Brugh didn’t even know what he was going to say as Deacon, so I couldn’t be as unpredictable as him. I ended up making my character less and less powerful as it went on, because you don’t know what Johnny was going to do,” Clement explains.

Despite constant rewriting and editing, Clement and co-director Taika Waititi wanted to stay true to vampire lore as much as possible. This presented another set of problems.

“We wanted to honour the rules of the vampire. Some of the older vampire lore is crazier than anything you’ve seen in the film. One that stuck in our head is that to get rid of a vampire, according to Eastern European lore, you have to get the vampire’s sock, put some garlic in it, tie the sock up and then throw the sock in the river.

“Which you would never see in a movie, because it would just sound like we made it up. In actuality, Eastern European vampires are not very cool or sexy bitches.”

This year, Clement has made Sundance debuts for two further big screen roles: People, Places, Things, in which Clement stars as a teacher balancing his job, his art, and solo parenting, and Jared Hess comedy Don Verdean.

He also makes his American TV debut in a recurring role in HBO’s comedy pilot Divorce, alongside Sarah Jessica Parker (as Frances). Clement will star as Julian, Frances’ close friend, a literature professor who lives in Manhattan.