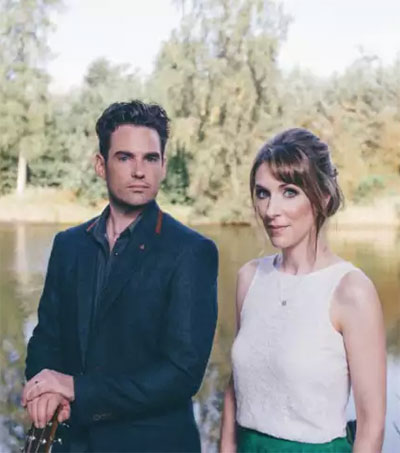 New Zealand-born songwriter and multi-instrumentalist Jamie McClennan and Scottish singer Emily Smith have been making country folk music together for 15 years. Now they tour for the first time with their two young children in tow, aged two and almost five.

“Fortunately, my dad will be coming with us as tour nanny,” Smith says. “That’s his official title.”

McClennan and Smith have two new albums on the way, because they “came up with so much material,” Smith says.

The first album out this month is called Unplugged, and the second will be available early next year.

“We want to try to pace ourselves!” she says.

Inevitably, Smith and McClennan’s world has changed hugely since the children arrived:

“Before the children, we had ten years of touring, and in some ways, it was great, just being able to get up and go, but I certainly wouldn’t change a thing.

“The great thing about parenthood is that you are no longer the most important person in your life. Your point of view changes, and many of the songs that Jamie has written have been inspired by the children or by parenthood or by the choices we have made, and we are finding that people are responding really positively to those songs.

“Jamie has always been an amazing multi-instrumentalist, but I think he has found his voice as a composer since the children.”

McClennan and Smith perform at the Whitworth Centre in Matlock, Derbyshire, UK on 21 April.