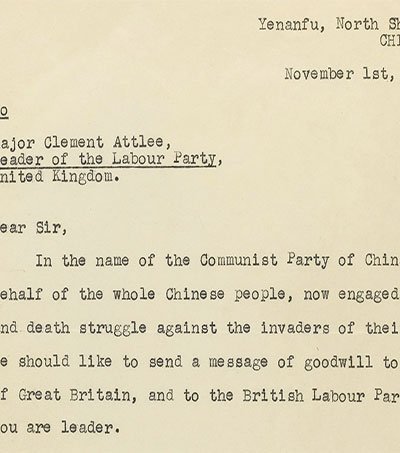 After a flurry of bids in the Sotheby’s saleroom and on the phone, the first letter written to any western leader by Mao Zedong – composed in a remote province in north-west China in November 1937, four months after the Japanese invasion – was sold to a private Chinese collector.

The letter was typed – and presumably translated from the original Chinese – by Bertram. He had managed to cross Japanese lines, escorting the wife of one of the Communist party’s leaders, and reach the Communist headquarters in the extremely remote province of Yan’an. The letter concludes with the sentence: “Long live the Peace Front of the Democratic Nations against Fascism and Imperialist War!”

Mao, then aged 43, already had a formidable reputation as a guerrilla fighter and leader, and Bertram was very impressed, being reminded of the fight against the rise of fascism in Europe. He knew Attlee personally, and was probably able to tell Mao that the Labour leader was leading his party away from its traditional pacifist stance.

The letter was signed by Mao in Chinese characters and his name transliterated as Mao TzeTung, and by other leaders including general Zhu De, one of the founders of the People’s Liberation Army.

Whatever Mao hoped to achieve with the letter, Bertram clearly knew it would not have any immediate practical effect. He sent it to Attlee with a hand-written covering note. “I have the distinction (for what it is worth!) of being the first Englishman to visit the Chinese Communists on their home ground … You should keep the enclosed letter, if only as a curiosity. It is probably the first time that the signatures of Mao and Chu have ever been seen in England.”

It was kept in Attlee’s family ever since, and was sold by his daughter-in-law, Anne Attlee.

Born in Auckland in 1910, Bertram was a Rhodes scholar and studied at Oxford. As well as writing and publishing a range of books, Bertram was a relief worker and a university professor.