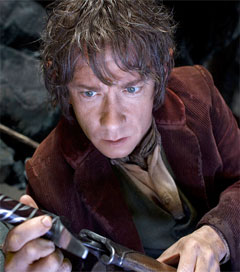 “With his first of three Hobbit films, An Unexpected Journey, Peter Jackson daringly attempts the same manoeuvre [as George Lucas does in his 1977 film Star Wars], aspiring to capture the essence of his Lord of the Rings trilogy while translating it for a younger crowd,” Matt Patches writes in a review for Hollywood.com. “What Jackson understands and gets wonderfully right in An Unexpected Journey (and that Lucas failed to understand with 1999’s The Phantom Menace) is that kids dream like adults.” Film critic at Indiewire, Eric Kohn is equally enthusiastic: “There’s a sense throughout An Unexpected Journey that Jackson has transitioned out of a conventional filmmaking role and instead become New Zealand’s resident Willy Wonka, the skillful proprietor of a wondrous Hobbit factory the country can call its own.” Less convinced, particularly about the film’s introduction of 48-frames-per-second digital cinematography (“everything takes on an overblown, artificial quality in which the phoniness of the sets and costumes becomes obvious”), is Variety’s Peter Debruge. “Bilbo’s ‘unexpected journey’ is awfully slow to start … [the film is] overtaxed by a surfeit of characters,” Debruge says. “Jackson and his team seem compelled to flesh out the world of their earlier trilogy in scenes that would be better left to extended-edition DVDs (or omitted entirely)”.