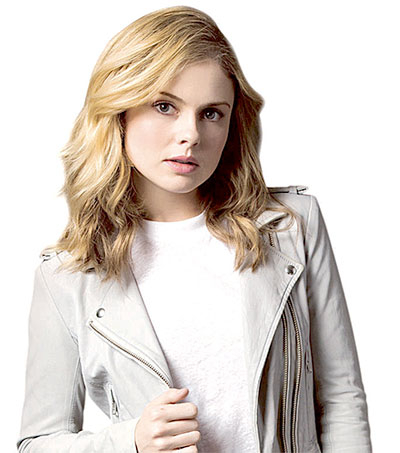 In iZombie Rose McIver Devours Her Brainiest Role yet

“But at a recent interview in New York, McIver was aglow, her wide blue-grey eyes set off by a flannel coat designed by Juliette Hogan, a fellow New Zealander who has been dressing McIver since she was cast in her breakout feature-film role at 19 in Peter Jackson’s The Lovely Bones.”

“We did this stuff that was like fondant icing in the pilot,” McIver explains. “‘But in the end the thing that looked most convincing and tasted bearable was coconut agar-agar, which is like gelatin. We drown it in corn syrup – this pink, sticky, bloodlike fluid – and it’s pretty disgusting, to be honest. I’m supposed to look like I’m savouring it.

“‘Most of the time, I have a spit bucket. Each week I consume the brains in a different cuisine, like in chow mein noodles or a salad.’

“[McIver] has appeared as a libidinous candy striper in Masters of Sex and a moody Tinker Bell in Once Upon a Time. Critics have responded affectionately to McIver’s star turn as an all-too-human monster, with Neil Genzlinger of the New York Times calling iZombie “ridiculously likable.”

McIver is originally from Auckland.