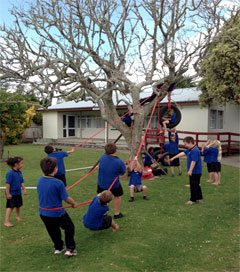 Swanson School principal Bruce McLachlan’s unconventional approach to playground rules is making waves around the world with school administrators and parents as far away as the United States and the United Kingdom asking how they, too, can abandon a rulebook designed to assuage fears about school safety in a seemingly dangerous time.

Since scrapping the rulebook on the playground of concrete and mud, dotted with tall trees and hidden corners, fewer children were getting hurt. Students focused better in class. There was also less bullying, less tattling. Incidents of vandalism had dropped off.

Children don’t hurt themselves because they’re testing their boundaries, McLachlan said. They don’t set out to recklessly self-injure, though it may happen in the process of finding their footing.

So many of the rules, he said, are “ridiculous,” and designed to soothe adults.

“The Ministry of Education or somebody should be able to come into the school and point out to the trustees what an idiot this principal is,” McLachlan said. But no one has. In fact, the support has been overwhelming, he said, musing that people must be tired of the “politically correct” attempts to shield children from danger.