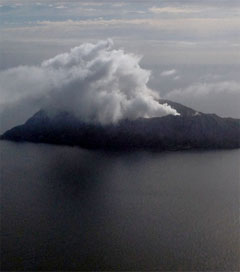 The most memorable sighting of New Zealand geothermal activity for the National Post’s Maryam Siddiqi was on a trip to White Island, “an active volcano that contains all of those belching, bubbling features, and then some.”

“The island, 50km off the coast and the country’s only permanently active offshore volcano, is privately owned, so one can only get there via tour operators such as Volcanic Air Safaris, who took me up in the air via helicopter.

“Tim Barrow, my guide, explained that tours used to take place on the north side of the island, but due to constant activity resulting in shifting terrain, visitors now access the south side. ‘Two years ago, there was a lake here,’ Barrow said pointing at barely visible ripples of water as we stood at the edge of the crater.

“As we walked around the south end of the island passing stone and rock coloured dark grey, pale pink, yellow and orange, gas masks in hand as precaution, Barrow explained the terrain, encouraging me to dip my hand in various tiny streams of bubbling water, which got warmer the closer we got to the volcano’s opening.

“Barrow and I spent a considerable amount of our time on the island in silence, rock and debris crunching beneath our feet, the steady hiss of smoke coming out of the crater, water lapping up against the shores. There’s not much to say when nature is flaunting its power.

“The best bit is that it will all look different the next time I’m there.”