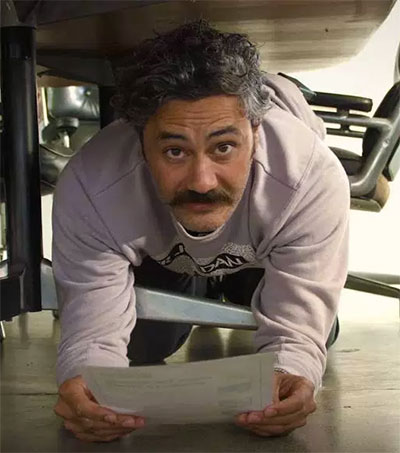 Masculine society is a fragile and insecure thing, and few writers or directors understand that more than New Zealand-born filmmaker Taika Waititi, according to Leigh Monson writing for Substream Magazine.

“Once best known for writing and directing episodes of Flight of the Conchords, Waititi has established a name for himself over the past decade as an indie auteur with a keen eye for absurdity and a sense of humour about his humble origins,” Monson writes.

“But there’s a bit more going on in Waititi’s work than simply overt comic odes to backwater detachment from popular culture, though his films are certainly filled to the brim with that. Rather, Waititi explores immaturity and coming of age in his protagonists by placing their posturing personas under a microscope, and though what we find upon further examination is often hilariously absurd, it’s also quite telling about the lengths men will go to in order to project an image of competence.”

The Waititi-directed Thor: Ragnarok is scheduled to be released on 3 November.

Tags: Boy  Eagle vs Shark  Hunt for the Wilderpeople  Substream Magazine  Taika Waititi  What We Do in the Shadows