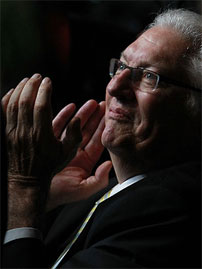 Opera singer, sports administrator and Southern Opera founder Chris Doig has died in Christchurch, aged 62. Former New Zealand Cricket (NZC) chief executive and member of the New Zealand Rugby Union (NZRU) board, Doig was made a Companion of the New Zealand Order of Merit in June. Rugby Union chairman Mike Eagle said Doig’s passing was very sad. “Chris’ contribution to New Zealand through sport, art and entertainment is immense,” Eagle said. Prime Minister John Key said the country had lost a remarkable New Zealander. “Chris made a great contribution to our country in both culture and sport. Even in his final days he was helping the people of Christchurch as a driving force behind the Placido Domingo concert which raised hundreds of thousands of dollars for arts in the city.” New Zealand Cricket’s current chief executive Justin Vaughan praised Doig’s contribution to cricket in New Zealand. “He was a great servant of New Zealand Cricket and an insightful and astute administrator,” Vaughan said. “He will be fondly remembered for his contributions not only to cricket but his service to other sports, the arts and the community.”