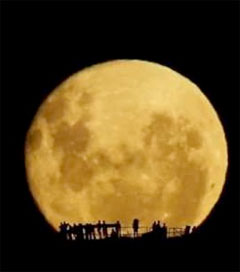 Howling at the Moon

In real time, Wellington photographer Mark Gee shot this video of the moon rising over the capital with the silhouettes of people gathering to watch the spectacle at the Mount Victoria lookout. In order to capture the moon at such a large size, Gee positioned himself 1.3 miles from the lookout and used a super-telephoto lens on his professional-grade DSLR camera. Shooting at such a distance with a long focal length effectively magnifies the moon making it appear larger in the frame. Gee said: “It’s something that I’ve been wanting to capture for a over a year now. After a lot of planning and many failed attempts, I finally managed to pull it off.”