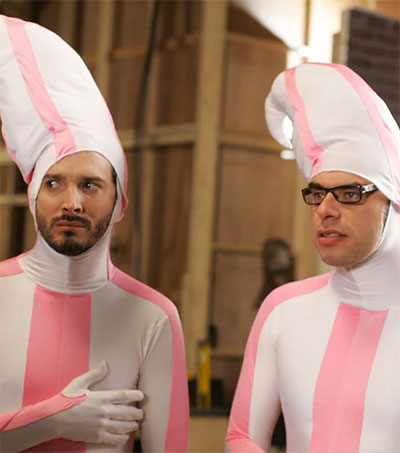 How Flight of the Conchords Took Off

Few comedians ever play London’s O2 Arena and fewer still manage three nights in a row. Those who do tend to have some things in common: a relatable observational style, limited creative ambition and ruthless commercial savvy. None of which applies to Flight of the Conchords, perhaps the unlikeliest act ever to reach those airless heights of the comic stratosphere. The Guardian’s Brian Logan examines the “shrewdness behind the duo’s laidback shtick”.

If you first saw Bret McKenzie and Jemaine Clement, as I did, in a dingy cellar on the Edinburgh fringe 15 years ago, you may struggle to wrap your head around the scale of their new tour. But if you factor in a Disney film, writing an Oscar-winning song for The Muppets, a sleeper hit HBO sitcom, and the fact that this musical-comedy duo is one of the funniest and most talented acts to come along in two decades – well, an explanation begins to take shape.

“People who discovered them at the movies have then gone back and watched Flight of the Conchords,” fellow New Zealand comedian Jarred Christmas says. “And the sitcom did what The Office did: it stopped at its peak, arguably before its peak, so people have remained perpetually desperate for more.”

And now they’re getting it, as McKenzie and Clement touch down for the UK leg of their world tour. “They’ve just been so consistently good over their entire career,” Rose Matafeo says, who credits the life she’s living today as a New Zealand comic, based in the UK and working internationally, to their example. “Everyone has their own special relationship with a stage of the Conchords’ career. Some people saw them early, at Edinburgh. Some people – like me – remember downloading bootlegs of their songs from the internet. And some people came to them after the sitcom finished. It’s all been so good that, whenever you encounter them, you fall in love with them.”

Since this article was written, the Flight of the Conchords have postponed their UK and Ireland shows after McKenzie injured his hand.