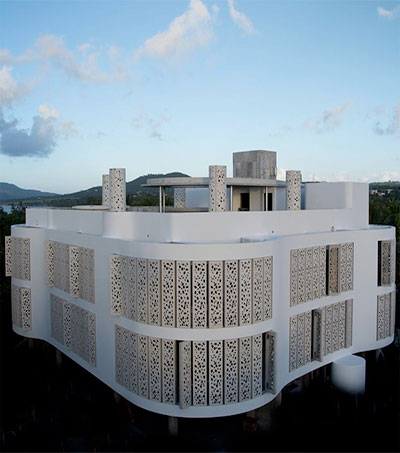 No building in Vieques, Puerto Rico is “more striking” than new 22-room eco-hotel El Blok, according to the New York Times. Co-owner, Simon Baeyertz, “a dashing New Zealander and longtime record industry executive, explained his reasoning for opening an upscale hotel there.”

An exotic oddity with a round cast-iron and concrete facade, sculptural perforations and open floors El Blok is so unusual writer Luisita Lopez Torregrosa says she could hardly find the front door.

“Though Baeyertz and his co-owners, all English, received tax credits from the Puerto Rican government as well as certain tax exemptions and other incentives, he later wrote in an email, that wasn’t the sole reason.

“‘After years staying in hotels, I figured I should be able to engineer a guest experience for intrepid travellers like me, and Vieques really shone as the place to do that,’ he said. ‘I do see El Blok as part of a young, cool and creative Puerto Rico that is making the country a far more interesting destination than it has been in the past.’”

Wallpaper magazine includes El Blok in its travel directory, writing: “They have not only harnessed thermal and solar power to generate electricity and heat, but also made clever use of local materials to create coral-inspired perforated panels that allow light and air to filter naturally through the building. Inside, most of the furniture is made locally, such as the almond tree bar and the reclaimed mahogany retro chairs, while a wild collection of coconut fibre sculptures by San Juan-based artists Jamie and Javier Suarez hold court.”