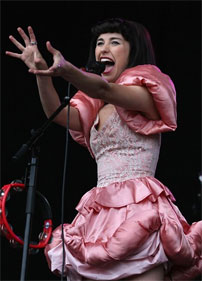 New Zealand singer Kimbra, 21, is on tour in the United States, where she spent four days at the South by Southwest (SXSW) festival in Austin, “playing the biggest sponsored parties along with her official SXSW showcase.” “There’s never been a better time in pop history for a woman with a geek streak: someone with the kind of mathematical mindset to construct computer-looped patterns and grooves that can swing,” The New York Times’ Jon Pareles writes. “Her voice can be airy, cutting, or a perky new-wave yelp; her melody lines can zigzag through the rhythms or sail up above them, often breaking into poppy nonsense-syllable hooks.” Kimbra’s 2011 debut album Vows has gone platinum in Australia. Kimbra is originally from Hamilton.