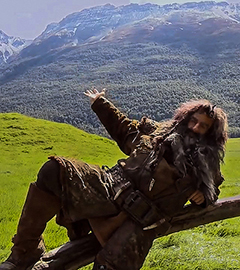 For those who have never been to New Zealand, highlights of The Hobbit and Lord of the Rings films are often seeing the remarkable film locations, such as Lake Pukaki in Canterbury, and Mavora Walkway and Glenorchy in Queenstown.

The film’s actors are particularly enthusiastic about New Zealand’s natural sights as well.

In a video for Pure New Zealand, actress Evangeline Lilly, who plays Elf Tauriel in The Hobbit: The Desolation of Smaug, says, “It was more incredible than you can describe, it was more beautiful than I know how to put into words. It was truly and utterly breath-taking.”

Lilly is a newcomer to the trilogy. Likewise new, is Sherlock actor Benedict Cumberbatch, who voices the dragon Smaug.

Cumberbatch took an active approach to New Zealand tourism: he went sky-diving, paragliding, down the Skyline Luge, and over the Shotover River rapids.

“I’m a bit of an adrenaline-junkie,” he admits.

Martin Freeman, who plays Bilbo Baggins says, “The beauty of [New Zealand] was not lost on us. It looked like CGI … more perfect than nature. We were looking at it thinking, ‘no one is going to believe this is real’.”

The Hobbit: The Desolation of Smaug is yet to be released in cinemas, but after the Los Angeles premiere earlier this week it has already made a favourable impression on reviewers.

Richard Corliss of Time Magazine rates Peter Jackson’s latest as tenth on his list of the year’s best movies, calling it a “vigorous and thrilling middle episode.”

“In all, this is a splendid achievement,” Corliss says, “close to the grandeur of Jackson’s Lord of the Rings films.”