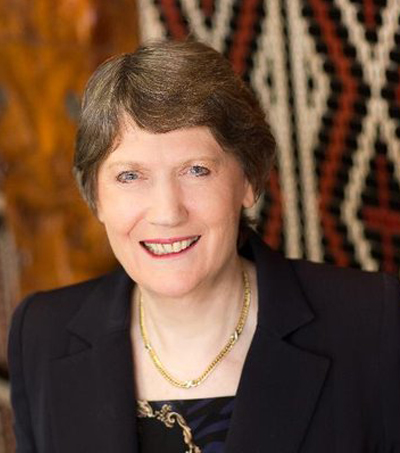 “‘I can offer the style of leadership needed today’. Such words sound unremarkable coming from a politician in this messy and pivotal election cycle. But when they come from the right woman with an unequalled background at the ideal moment, humankind should listen,” writes William Pesek in a column for Barron’s Asia.

After eight male chiefs since 1945, virtually everyone agrees that the next secretary general should be a woman. “Of the names mentioned so far, none possess the skill, gravitas or knowledge of an institution fast losing its clout than the former New Zealand prime minister.”

As UN’s No. 3, Clark is running the U.N. Development Programme that aims to eradicate poverty. She has a track record of reform and an intimate knowledge of the U.N. system’s flaws. During her time as Prime Minister in New Zealand (1999 to 2008), she increased the minimum wage, provided zero-interest-rate student loans, created a carbon-emissions trading system and refused to join George W. Bush’s Iraq invasion fiasco.

Despite her capabilities, there seems to be one problem: It’s widely viewed as Eastern Europe’s turn to assume leadership of the U.N.

“With all due respect, it would be a shame to let U.N. etiquette and regional sensitivities shelve a stellar option like Clark,” writes Pesek.

“Tapping Clark also neutralizes another problem: Vladimir Putin installing one of his cronies.”

More important than a zip-code should be that “the U.N. be helmed by a person who sees where its infamous bureaucracy is failing – and where the world is heading.” The U.N. often is bemoaned as change-resistant in a conflict-ravaged world where it is needed more than ever.

“Clark, for example, talks lots not just about shaking up an institution Ban hasn’t these last 10 years, but refocusing attention on taming civil wars and addressing the causes of extremism.”

According to Pesek, another reason it’s time for a female leader is basic priorities.

In our global economy that is failing to adapt to the needs of its 7 billion-plus people, it’s important to understand the links between hunger, poverty, conflict, migration, economic cycles, and climate change. “When Clark, for example, talks about addressing extremism, she’s not referring to U.N. troops, but the basic conditions that fuel it.”
Clark hails from a nation as much on the front lines of climate shifts as any developed one. She has spent more time in the global trenches than any other name being bandied about.

“And if you think U.N. leaders are too beholden to the whims of the most powerful governments, consider Clark telling President Bush to take a walk in 2003.”