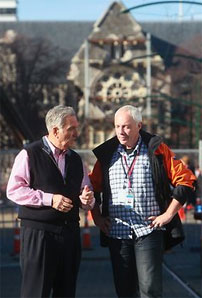 Bob Parker is taking advice from former San Francisco mayor Art Agnos, who was mayor when the Californian city was struck by a devastating earthquake in 1989. Agnos has come to Christchurch to advise New Zealand authorities on recovery plans and pitfalls. Agnos was shown through the Red Zone, a fenced off no-go area that takes up much of the city centre, by Christchurch Mayor Parker. “It’s horrific, and frankly it was worse than ours,” Agnos said. Agnos said Christchurch residents could take heart from the fact that San Francisco recovered completely but he warned that took many years. “This is a once-in-a-lifetime opportunity to rebuild a city for the first time since the founders laid it out 150 years ago.” Parker said he was confident the damaged parts of Christchurch could be rebuilt as a modern, quake-proof, hi-tech, energy-efficient, people-friendly and beautiful place.