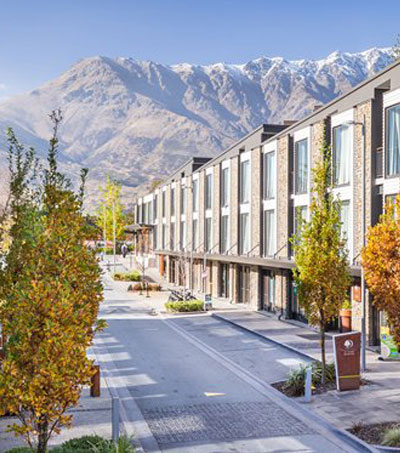 “Situated on New Zealand’s South Island is Kawarau Village and where you’ll find Doubletree Hotel and Hilton Queenstown Resort & Spa. The properties are hugged by the serenity of Lake Wakatipu and set against a stunning mountainside backdrop (…) and even though the last remnants of the The Lord of the Rings film “were shot here in 2004, you can still feel the robust presence of a mythical allure in the air.” Which explains why health, wellness and beauty elements here exude a sort of unspoken magic; Kiwis thrive upon it,” writes Tiffany Leigh in an article for Forbes.

One of their flagship spa treatments is the Aroha Goddess Escape service. “In Māori language, the word Aroha means “love”.” While the service features the usual suspects including a massage, back exfoliation and facial, there’s also another more unusual treatment component: locally sourced rose quartz, which is used in treatments on the face and décolletage.

Erin MacDermott, eforea Spa Manager and Registered Massage Therapist at Queenstown Hilton said that “the rose quartz is proudly sourced from the nearby and surrounding areas of Queenstown” – a region that was “historically popular for gold mining.”

The gems from this particular region are incredibly pure due to the remoteness of its location and New Zealanders subscribing to a “clean and green” philosophy, according to MacDermott.

“We always consider the impact we have on our clientele’s body, mind and soul. Energetic work is a large part of this philosophy. And our healing stones, such as rose quartz, is sourced ethically and locally from our historic gold mines. This in turn, helps to bolster the overall positive energy supplied by targeting the metaphysical heart chakra and transferring healing to clients,” said MacDermott.

According to MacDermott the rose quartz “symbolizes (and is imbued with) unconditional love”.

“During the treatment, we methodically caress the smooth stones over the client’s face and place one on the décolletage; this helps to drain toxic energy and negative emotions locked or trapped inside. It’s allowing oneself to accept this (alternative) form of healing – especially when we live in a world where we’re constantly bombarded with noise and stimulation.”

Unilever New Zealand will be trialling a four day workweek for one year, representing a fundamental change in the way the company views their workforce, reports Azi Paybarah for The New…