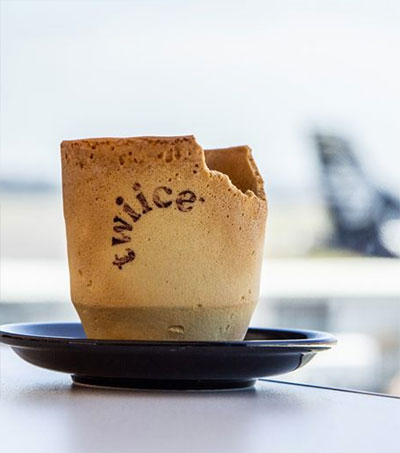 “You might think that all airplane food tastes like plastic packaging, but good news: In a twist of fate, you can now eat airline packaging that actually tastes like food. Because it is food – at least when you fly Air New Zealand,” Lilly Smith writes in an article for Fast Company magazine.

“The airline has partnered with New Zealand-based, family-owned company Twiice to trial its edible biscotti coffee cups as part of an effort to further reduce in-flight waste,” Smith writes. “While the airline’s current cups are compostable, the ultimate goal is to remove them from landfills completely, according to Air New Zealand senior manager customer experience Niki Chave. Making them edible could be one way to do so, sending the 8 million coffee cups the airline serves per year straight into our stomachs rather than the garbage.

“The cups are not only ‘edible’ (a term people use when they’ll eat something for sustenance or to prove a point but don’t plan on enjoying it) but tasty, according to positive reviews cited by Air New Zealand. Made of wheat flour, sugar, egg, and vanilla, it’s basically a cup-shaped vanilla cookie; the perfect vessel for your coffee and a post-coffee treat. Though each handmade cup may have slight visual differences, there’s no need to worry about the cup disintegrating before your eyes and leaving you with a lap of piping hot coffee.

“The addition of the edible coffee cups is part of a larger move by Air New Zealand to adopt more environmentally sound business practices. According to its 2019 Sustainability Report, the airline replaced individual plastic sauce packets with sauces in reusable dishes on its Business Premier cabins on North America and Hong Kong services this year, a practice the airline says could divert 200,000 plastic packets from the landfill each year. While the report doesn’t state how many single-use plastics it uses overall, it cites other waste-reduction programs, as well. The airline says it surpassed its 2018 goal to transition 24 million single-use plastic products to lower-impact alternatives, and has expanded the project scope to 55 million single-use items. It also removed single-use water bottles from some regional flights, which it says will divert more than 460,000 bottles from landfills and, by reducing the aircraft’s weight, lower carbon emissions by more than 300 tons per year.”