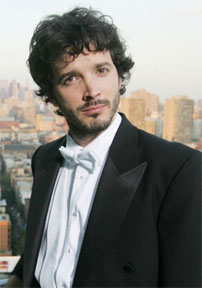 Bret McKenzie is in Utah, where he’s “picked up some sort of Mormon cold” while filming a scene with a foal for Austenland: he delivers a foal. “We shot it in England this summer, and the foal looked a little large onscreen,” McKenzie tells The Carpetbagger, The Awards Season Blog of The New York Times. “When they started editing, it looked like the mare gave birth to another fully grown horse. So I’m filming it again with a tiny foal.” McKenzie also talks about the possibilities of being nominated for an Oscar for his work on the Muppets. “The whole film awards world is new to me,” he says. “I learned more about the Oscars recently because Peter Jackson won a lot of them for The Lord of the Rings so there are some Oscars in Wellington. I’m going to do some campaigning in New Zealand. I’m going to go to my family Christmas dinner and drum up some support, grass-roots level.” McKenzie was born in Wellington. He plays Martin in Austenland, which will be released next year.