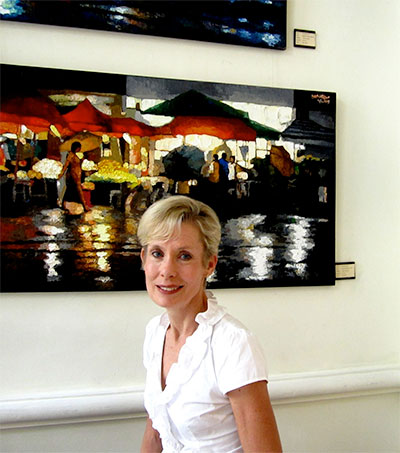 Owner of Yangon’s River Gallery, New Zealander Gill Pattison is part of the city’s creative boom. Myanmar’s art scene is flourishing since military rule was scaled down in the country.

“Life in Myanmar at this time is so rich and interesting,” says Pattison who opened the gallery in 2005 and a sister venue, River II, around the corner in 2013.

Work by former political prisoners is exhibited at the River Gallery in the upmarket Strand Hotel.

On the River Gallery website, Pattision, who has lived in Yangon since 2002, says when she first opened the gallery her aim was to showcase Myanmar’s talented contemporary artists who were very little known at that time.

“I felt strongly that they deserved better representation and exposure to a wider market. I called the new gallery ‘River’, not only because of its location beside the Yangon River, but also because I liked the notion of the artists’ creations flowing out of the country to be seen and enjoyed by people from all around the world.”

The Guardian recommends Pattison’s galleries in an article about the counter-culture scene in Yangon:

“Inside the luxurious, colonial-era Strand Hotel in the city’s old town, the River Gallery is an easy place to potter in for an hour or two. Drop by the hotel bar (where the occupying Japanese stabled their horses during the second world war) on Friday nights for the half-price happy hour. Find the sister gallery, River Gallery II, a few minutes’ walk around the corner on 38th Street.”