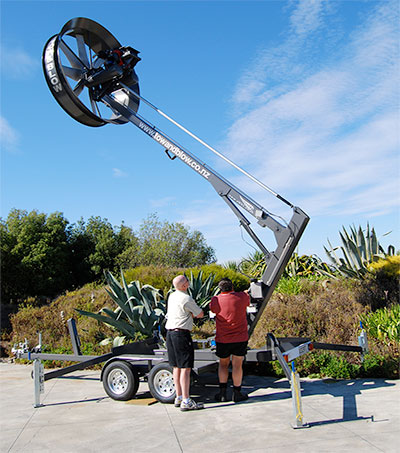 According to the company’s website, the Tow & Blow wind machine “delivers frost protection for crops and plants using a low power input.”

“The area of crop protected from frost matches that of a traditional wind machine (four-plus hectares). This outcome is achieved because the frost fan is encased in a shroud. The shroud increases the efficiency of the wind machine fan by 95 per cent.”

Powered by a 24cc Honda motor, while the fan is an impressive piece of machinery, it’s easy to manage for the everyday farmer.

“There have been transportable units developed in the US, but they’re cumbersome, they either have a diesel motor or they’re [power takeoff] PTO powered,” McAulay’s brother-in-law Brett Feehan said.

During eight years spent in the United States, McAulay studied the use of wind machines for frost protection and then began importing the US models into New Zealand, before designing his own.

The FrostBoss, which McAulay sold five years ago, is now well known throughout the world.