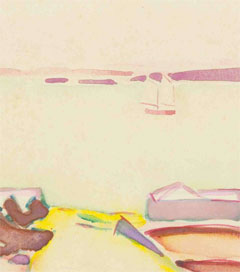 Christchurch-born artist Owen Merton was an accomplished Post-Impressionist painter who did some of his best work in Bermuda; a selection of these paintings feature in an article about Merton on the Bernnews website. “Primarily celebrated for his watercolours, landscapes, and seascapes, Owen Merton’s paintings are on permanent display in galleries around the world, most particularly in England and New Zealand, where a major retrospective of his work was displayed in 2004. Moving to Europe as a young man Merton and his wife Ruth lived from mid-1914 to mid-1916 in Prades, southern France, where their first son, the future Trappist monk Thomas, was born in 1915. Merton played the piano in charity concerts and perhaps in the local cinema and refused to enlist after the First World War broke out. The family moved to New York in 1916, and Merton was based there until 1923. In the years 1921-23, after his wife’s death, he visited Bermuda twice. Meanwhile he had met the American writer Evelyn Scott in Bermuda, in late 1921 or early 1922, and lived with her until 1925. He became the basis for characters in several of her novels. In the summer of 1925, he returned to Europe for the last time, accompanied by Thomas. They settled in Saint-Antonin, France, where he bought land and built a house. Owen Merton died in London in 1931 after a prolonged illness. ‘To my eye Merton’s work is reminiscent of Cezanne, Whistler and Gauguin, possessing a simplicity of design that is at times nearly Asian,’ one art historian has said of his paintings. … I [also] sense Van Gogh’s influence. Lovely in their own right, Merton’s landscapes also provide a fascinating visual history of the world of the young Thomas and his family in France, the United States and Bermuda.’ His son’s autobiography, The Seven Storey Mountain – ranked as the one of the hundred best non-fiction books of the 20th century by National Review magazine – alludes to Owen Merton’s life and work and the time the family spent in Bermuda.” Merton was born in 1887. He studied at the Canterbury School of Art.