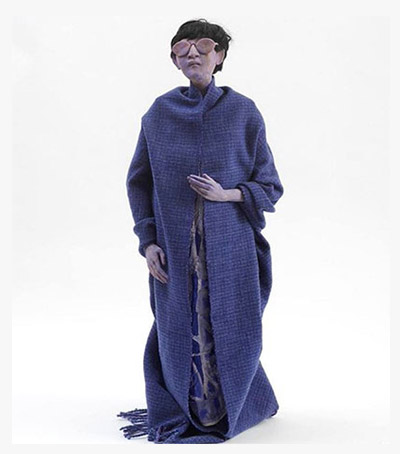 “Upritchard has modified a group of hockey sticks at MUMA to resemble a collection of exotic lizards or long missiles,” Nelson writes. “The handle becomes the tail and the lopped head is split, yielding a wicked suggestion of jaws. They uncannily capture both the looks of a creature and the weapon used to kill them.

“Recalling anthropological collections of spears mounted upon a wall, Upritchard’s horizontal array of altered sporting gear represents injury on the wall, an arsenal of agony, vectors of grief that club the onlooker’s security.

“With the title of Jealous saboteurs (also used for the exhibition as a whole) these dangerous specimens retain their origins of a hockey stick, where characteristic details in the binding of the handle are not suppressed. The ambiguity of something ordinary and something outlandish keeps both alive in your imagination and the two reflect on one another.

“Simultaneously a kind of bat and a reptile, Upritchard’s aesthetic concept is oxymoronic: the hockey sticks are delicately brutal, quaintly savage, decoratively dismal.

“Upritchard’s figures look like derelict loners who have come out of their antiquated lodgings in their pyjamas, their hand-me-downs, old coats and discarded costumes from the theatre. They live outside the self-conscious world of fashion and social convention; like statements of oblivion, they moon and stumble in their language of yesteryear, their absorption in the narrowness of their own experience, their routines and withdrawn preoccupations.”

Upritchard is represented in London by Kate Macgarry, in the United States by Anton Kern Gallery, and in New Zealand by Ivan Anthony Gallery.

Jealous Saboteurs is on at MUMA through 16 April.