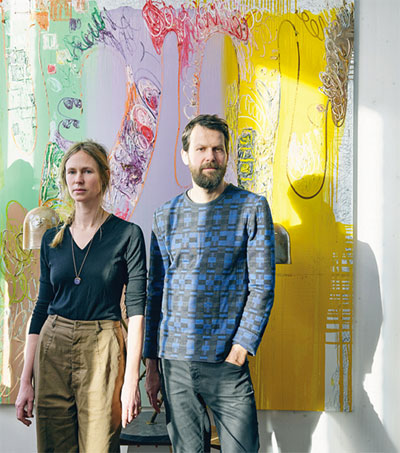 In the commune-esque home of New Zealand-born artist Francis Upritchard and her husband, Italian designer Martino Gamper, the colourful trappings of life and work are uniquely integrated. The New York Times is invited into their East London apartment.

Upritchard, like Gamper, is drawn to weird, jolie laide colour palettes like ’70s greens and neon oranges. Gamper tiled their bathroom in terra-cotta stone partly because it reminded him of his childhood in Italy but also because “white tile feels so cold.” And according to Upritchard, when her husband found a “vomit brown” sink online, she had to have it. They’ve added pops of other colours with art (there is no shortage of friends’ portraits of Gamper) as well as furniture from up-and-coming designers like Max Lamb and Bethan Laura Wood.

Gamper has done patchwork bags for Valextra, window installations for Prada and colourful chairs for the Italian company Moroso, to name just a few. One of his steadiest collaborators, though, is Upritchard, whose crafty, domestic sculptures –otherworldly clay figures, strange bonelike weapons, lamps with pinched faces embedded in them – share a handmade quirkiness with her husband’s designs. The couple met after Upritchard saw a poster for Gamper’s “Confronting the Chair” show at the Design Museum in London in 2006 and decided to visit his studio. For their joint show at Anton Kern Gallery in New York, which runs until [20 February], Gamper built linoleum tables to display her pieces and surrounded them with chairs from a shuttered ice cream parlour in Italy that he salvaged and reupholstered. “They’re just everyday things,” he says with a shrug.