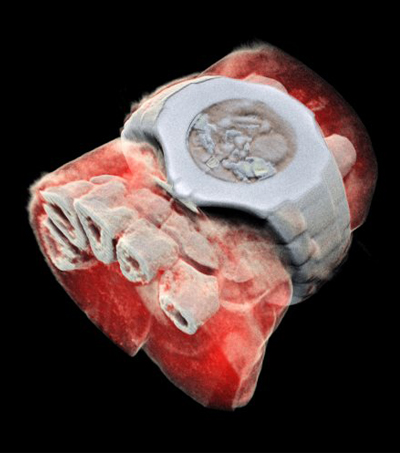 “A New-Zealand company has scanned a human body using a colour medical scanner based on Medipix3 technology developed at CERN. Father and son scientists Professors Phil and Anthony Butler from Canterbury and Otago Universities spent a decade building and refining their product.” Tom Austin-Morgan reports for Eureka Magazine.

“MARS Bioimaging, which is commercialising the 3D scanner, is linked to the University of Otago and Canterbury.”

“This technology sets the machine apart diagnostically because its small pixels and accurate energy resolution mean that this new imaging tool is able to get images that no other imaging tool can achieve,” said Prof Phil Butler.

“MARS’ solution couples the spectroscopic information generated by the Medipix3 enabled detector with powerful algorithms to generate 3D images. The colours represent different energy levels of the X-ray photons as recorded by the detector hence identifying different components of body parts such as fat, water, calcium, and disease markers,” as reported in the article.

“So far, researchers have been using a small version of the MARS scanner to study cancer, bone and joint health, and vascular diseases that cause heart attacks and strokes.”

“In all of these studies, promising early results suggest that when spectral imaging is routinely used in clinics it will enable more accurate diagnosis and personalisation of treatment,” said Professor Anthony Butler.