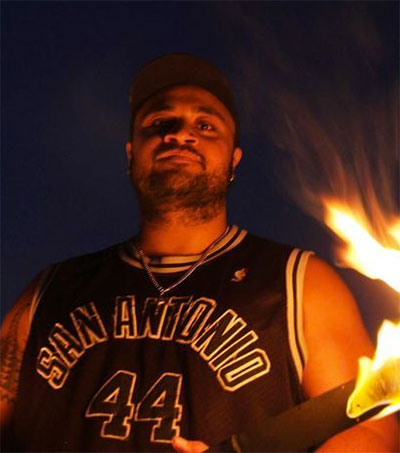 For New Zealand-born Samoan Hale Wilson, the art of fire spinning honours his culture and family history at the same time as looking cool.

Wilson has carried his Samoan fire knife to Auckland, Brisbane and Darwin – and to the beachfront at the popular Mindil Markets where he’s about to make his debut.

“This is what we call a ‘nifo oti’, which translates to ‘teeth of death’,” he said as he unsheathed the double-bladed staff from the towel it was wrapped in.

“It’s actually originally used for a weapon, but that was hundreds of years ago,” Wilson said.

“We use it as a tool to dance with, to entertain and to showcase our skill with the blade, the danger, and the fire – everything all in one, through dance. When you see me perform, you’ll see my motions and my movements are a bit more aggressive.

“My one’s more like a war dance showcasing the strength of the warrior and the speed and the danger.”

His parents migrated to New Zealand for the opportunities that country provided, and he watched his uncles perform from a young age.

He was eventually taught how to use the device by his mother, whose skills were passed on from her parents.