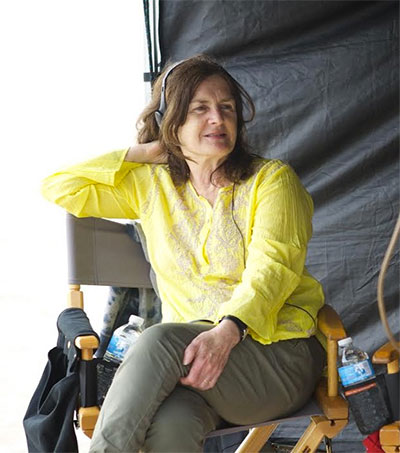 Dwyer has made such films as An Education, starring Carey Mulligan, Quartet (Dustin Hoffman’s first directorial effort) and A Long Way Down (based on Hornby’s best-seller.)

The Brooklyn Eagle spoke by telephone recently with Dwyer, while she was in New York for the screening of Brooklyn at the 53rd New York Film Festival.

The Eagle asks Dwyer about the genesis of her involvement with Brooklyn.

“I met Colm [Toibin] totally by chance in 2010. I needed to recalibrate after the fantastic journey with An Education that took us all the way to the 2010 Oscars. I had already read the book in 2009 and adored it. I literally was looking at a copy of Brooklyn in a little neighbourhood bookstore in SoHo and thought I must check if the rights are still available; I felt sure that I knew how the film could be made. I was equally sure the rights were probably long gone. The next day I went to visit a friend who was at the rare book sale at the Armory and who was also a friend of Colm’s. I asked him if he knew if Colm had sold the rights and he said that [Colm] would be along at some point (as he was teaching at Princeton and buying for the library). We ended up meeting, got on very well and by the end of that encounter, he said, ‘If you would like the rights, they are yours.’ I was absolutely delighted – and flabbergasted, because he had said no to everyone else.”

The publication also asks Dwyer about the film’s theme of exile and immigration, and how that theme will resonate with American audiences, when the film is released on 4 November.

“It was my mother’s story,” Dwyer explains. “For so many of the Irish, it was all our stories. And the cast sensed this also, Saoirse [Ronan] in particular, because she had been born in the States and then moved back to Ireland. And we were so fortunate to have her as our Eilis.”

Originally from Wellington, Dwyer began her career as an editor at the National Film Unit working on Country Calendar. Together with Australian Greg Bell, she was the sound editor on Came a Hot Friday. In the early 90s, Dwyer moved to London.