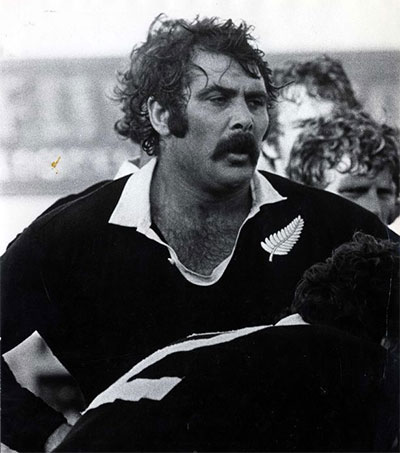 His closest friends in a remote town in the Australian outback had no idea who he was. Now that former All Black Keith Murdoch is dead at 74, the story of the man who disappeared more than 40 years ago can finally be told. Tony Barrass reports for WalesOnline.

The distinctive red soil that covers the Western Australia outback is known as pindan.

And poking from a small, dry mound of it in a remote, dusty graveyard a nine-hour drive from the nearest big city is a wooden cross bearing nothing but two dates and one name: ‘Keith Murdoch’.

This is the place where a story that began in Wales in December 1972 ends. It’s the final chapter in the life of a man whose name has become legend but whose closest friends had no idea who he really was.

It’s an astonishing, sad tale, perhaps the only one of its kind in sport.

Murdoch’s altercation with a security guard at the Angel Hotel makes front-page news in the South Wales Echo and the Western Mail, as well as in New Zealand, and the Rugby Football Union of England demand the New Zealand Rugby Union take action. Against the wishes of the team, the New Zealand hierarchy decide to send Murdoch home.

It is the first and only time an All Black has ever been sent home from tour in disgrace.

He never arrived in New Zealand.

Over the decades, various media organisations tried to track Murdoch down, with little success. One reporter found him in a pub in Tully, Queensland, where he told her: “This isn’t a story, this is my life.”

Romanticised by the Australian outback and embellished by hundreds of possible sightings over the decades, the Murdoch story became folklore. But the Sunday Times of Western Australia found out how Murdoch spent his final years in the remote coastal town of Carnarvon, even from his one close mate, Dean Parry.

“When we talked, he was happy to talk about what he done and what he enjoyed – and that obviously wasn’t football. So, I don’t blame him for not telling me,” Parry said.

“We loved Keith for who he was – not for who other people thought he was.”