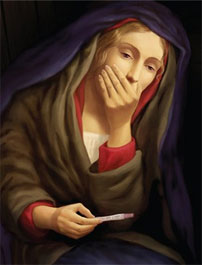 A billboard outside Auckland’s Anglican St Matthew’s in the City of the Virgin Mary gasping as she examines a pregnancy testing kit has sparked fiery debate. Defending the poster, the vicar, the Rev Glynn Cardy, said: “Although the make-believe of Christmas is enjoyable, with tinsel, Santa, reindeer and carols, there are also some realities. It’s about a real pregnancy, a real mother and a real child. It’s about real anxiety, courage and hope.” “Mary was unmarried, young and poor,” Cardy said. “She was certainly not the first woman in this situation or the last.” Lyndsay Freer, a spokesperson for the Catholic diocese of Auckland, was unimpressed. “Once again, St Matthew’s shows us that they have moved away from traditional Christianity, even though their hearts might be in the right place,” Freer said. Two years ago, a St Matthew’s billboard showed Mary and Joseph in bed, apparently naked after having sex, with the caption “Poor Joseph. God was a hard act to follow.”