NZEDGE  >  News  >  Arts  >  Exhibition of Colliding Worlds on in London 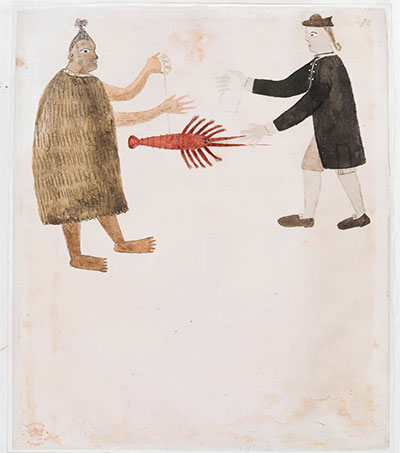 Exhibition of Colliding Worlds on in London

Work by ill-fated illustrators aboard Captain James Cook’s first journey to the Pacific sit alongside revelatory images by a Polynesian high priest in a haunting exhibition on now at the British Library in London.

“The fact that artists, as well as scientists such as the pioneering naturalist Joseph Banks, went on Cook’s voyages was unprecedented,” Guardian reviewer Jonathan Jones writes.

“There were none on the ships of Columbus or Cabot. Cook’s first voyage went to Tahiti so a team of astronomers could observe the transit of Venus. They were not there to conquer. They got on well with the Tahitians – too well for Cook, who worried the newcomers would spread venereal disease and was upset when satirists back home had fun with the romantic exploits of Mr Banks,” Jones writes.

“Banks’s friendship with the Tahitian female chieftain Purea led to the most unexpected of the expedition’s artworks. Tupaia, high priest of the god of war, was part of Purea’s retinue. He not only became a translator for the English, but also started to record Tahitian life and beliefs in bold, compelling drawings. When the Endeavour sailed on to New Zealand he went too, and portrayed their encounters with Maori people.

“Tupaia’s picture of Banks meeting a Maori, done in 1769, is one of the most eye-opening records of cultural encounter you could ever hope to see. For Tupaia, Banks and the Maori are foreign and fascinating. Banks in his blue coat is giving the New Zealander a piece of cloth in exchange for a big, red lobster. ‘I had a firm fist on the lobster,’ remembered Banks. Tupaia also died on the Endeavour’s return to Britain.

“By the end you feel dwarfed by the immensity of the world they sailed and haunted by the faces of the peoples they encountered. The violence of imperialism was coming. Yet this was a moment when strangers looked at one another with open eyes.”

Photo by The British Library.