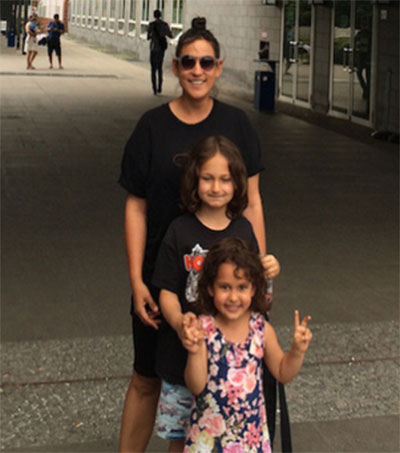 Evelyn Marsters Reflects on Her Move to Berlin

“It’s typical of the psyche of those born in a small island country to want to spend time overseas, to absorb firsthand the life we have been exposed to in our books and across our screens,” freelance research consultant, Berlin-based New Zealander Evelyn Marsters writes for the Huffington Post.

“There were other factors at play in [my husband and my] decision to move to Berlin of course, but one major push was that we felt the preoccupation with house ownership in New Zealand was not our dream, and that we still had other paths to follow. So, once again, we both started to look for opportunities overseas.

“In mid-2013, Dylan secured a job at a music technology company in Berlin. I was in the final writing stages of my PhD, and I when I look back I don’t think I realised the enormity of saying, Yes! Let’s do it. But we both said yes, and we started the planning. Practically the relocation was hectic but straightforward; it was the emotional shepherding of our parents, grandparents to our young children, towards understanding the reasons for our move that was the hardest.

“My first hazy observations of Berlin were of highly organised streetscapes, a sprinkling of large, dry-looking trees, and incredibly deafening ambulance sirens.

“My first significant emotional memory of Berlin is one of claustrophobia. The flat landscape and five storey high apartments in muted versions of beige in every direction began to feel like an urban cage. I couldn’t see very far into the distance before my view was obscured by a vertical, flat concrete surface. There were no hills, and no harbour to break up the monotony. I also noticed the crows, as big as dogs, which would become synonymous with my blackening mood.

“The fight has made [my family] the tightest little unit, and for me that has been the real beauty in this adventure. It’s been nearly three years now, and the harshness has begun to unravel. Sometimes I even feel like I am being embraced by a still often severe, but nonetheless beautiful city.

“I’m a Pacific migration researcher, and since arriving in Berlin I have found myself reflecting on and reinterpreting the stories told to me by many Cook Islanders over the last 10 years. I think I missed the overall point the mamas and papas were trying to pass on to me: it is good we can move, but it is a painful process that for a little while will break you. I’ve also been very aware of what is an often fraught journey and arrival to Berlin for many, as the refugee crisis has begun and continued throughout my time here. To all the people who are risking everything to walk or catch a boat to Europe – I hope you are able to find a home that allows you to put the pieces of your lives back together again.”

Marsters has a PhD in Development Studies from the University of Auckland. She is deputy editor at Impolitikal.