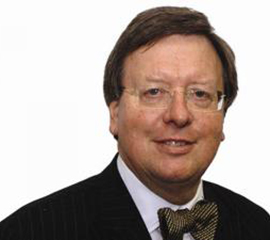 Eric Tracey has been named the UK New Zealander of the Year 2014 at the New Zealand Society’s Waitangi Day Charity Ball held in London.

Announced by the High Commissioner for New Zealand the Rt Hon Sir Lockwood Smith, and presented by Air New Zealand’s General Manager UK/Europe Mr Antony Price, The UK New Zealander of the Year award recognises the outstanding contribution that a New Zealand or British national has made in promoting the interests of New Zealand or New Zealanders in the United Kingdom.

Eric Tracey is a finance professional who, after leaving Auckland in 1973, became the first non-British partner in Touche Ross (Deloitte). In his time there he led audits, floatations, buyouts and restructurings for a number of companies, most notably leading the sale of Railtrack to Network Rail and taking the British Airports Authority to market. Among many causes supported over the years, Mr Tracey helped create the UK branch of NZ Society of Accountants, is chair of UK Friends of Auckland University, acting chair of the Christchurch Earthquake Appeal UK and former chair of the NZTE European Beachheads Programme.

President of the NZ society Tania Bearsley says the three finalists for the award were all great ambassadors for New Zealand.

“Eric Tracey stood out this year, with his ongoing personal commitment in supporting New Zealanders both in the UK and in New Zealand,” Ms Bearsley says.

Mr Tracey received an engraved award from the New Zealand Society and return air tickets to New Zealand, as part of his prize.

Past winners of the award include equestrian Sir Mark Todd and celebrity chef Peter Gordon.

Recognition was also given to Barrie Neilson who was the winner of the New Zealand Society Lifetime Achievement Award 2014.

Mr Neilson is the owner of Sailing Holidays, which operates a fleet of yachts and is said to be the only entirely independent flotilla sailing provider in the UK.

This is the 10th year the awards have taken place.