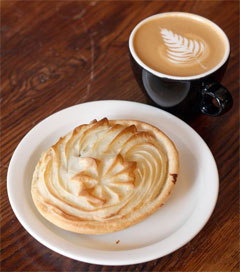 Eating Mince Pies off the Subway in New York

New York’s DUB Pies, run by New Zealander Gareth Hughes, “might be a tiny shop, but so is its specialty – the flaky-crusted savoury hand-made pies that are as popular as both bagels and pizza in New Zealand,” according to the New York Daily News who have included the shop in a feature about “eating along the G Line” in New York’s Prospect Park area.

“Along with excellent New Zealand-style coffee known as a ‘flat white’, they make nearly a dozen versions of pie at DUB, including curry vegetarian, steak and mushroom, the potato-topped shepherd’s pie, and a breakfast-themed bacon, egg and cheddar.

“The most popular pie, says longtime counterman Rex Williams, is actually the most traditional. It’s filled with a mix of sharp white cheddar and the aromatic ground beef mix [New Zealanders] call mince.

“DUB stands for Down Under Bakery. The shop started in Manhattan in 2003, followed by the Brooklyn branch in 2007. For those seeking flat whites and mince pie in mobile fashion, Hughes just added a food truck, too.”