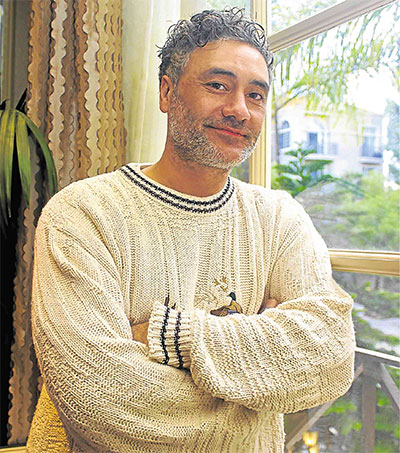 After directing Thor: Ragnarok, which was a worldwide blockbuster hit, New Zealander Taika Waititi next explores the Star Wars universe and returns to the world of vampires.

The multitalented Wellingtonian directs an episode of The Mandalorian, a live-action web TV series developed by George Lucas, and written and executive produced by Jon Favreau. Waititi joins a pool of talents, including Bryce Dallas Howard, who directs the series set after the events in Return of the Jedi, but before The Force Awakens. The show will premiere on the new streaming service, Disney+.

Waititi’s other TV project is FX’s adaptation of the 2014 comedy movie, What We Do in the Shadows, which he co-wrote, co-directed and co-starred in with Jemaine Clement. Waititi and Clement, buddies and fellow performers since university (HBO’s Flight of the Conchords is among their credits), shot the mockumentary about vampires who live together in Wellington.

The TV adaptation is set in Staten Island, where four vampires have been sharing a house for over 100 years.

“The first [Star Wars film] I saw was Episode IV,” Waititi tells the Philippine Daily Inquirer, “but the one that meant the most to me was The Empire Strikes Back. I know that George Lucas did a lot of research into parent/child relationships and what it is to lose a parent or child. It’s one of the most spiritual films, and the ideas behind it are great. To create something that magical, with so many crazy creatures and spaceships, is amazing.

“And for it to also have heart, be a great adventure and mean something … the idea of force and letting go of the ego, is all in those films. The idea of the force being in everything – there’s a lot of spiritual stuff in the films.”

Tags: Jemaine Clement  Philippine Daily Inquirer  Star Wars  Taika Waititi  What We Do in the Shadows