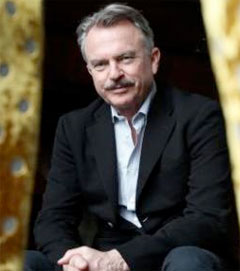 Differences of Time on and off Set

Actor and winemaker Sam Neill, 65, talks to the South China Morning Post about corks, cows and why action films are duller than they look. “Making good films and good wines are both very difficult to do,” Neill says. “Both are expensive. There’s a lot that goes into both that the end user doesn’t see. For instance, if you’re doing an action film, you would think it would be pish-posh, but making an action film is the slowest, dullest thing. You need hundreds and hundreds of people to do dull little jobs, and the whole thing [on screen] is over in 10 seconds. With a great bottle of wine, those vines have been nurtured and tended and cherished for years and years.” Neill has just completed work on A Long Way Down with Pierce Brosnan and Toni Collette, and The Tomb, with Sylvester Stallone and Arnold Schwarzenegger.