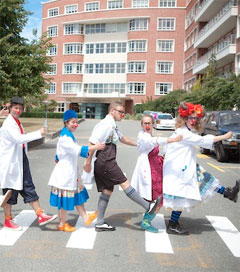 Degrees Available in Healing with Humour

New Zealanders considering a career as a professional clown will now be able to earn a certificate, diploma or full Bachelor of Arts in Medical Clowning. The qualifications are scheduled to be launched in December 2013.

The International Institute for Medical Clowning at Berlin’s Steinbeis University in Germany is the first of its kind in the world with 240 students currently enrolled to study the art of medical clowning. Dr Thomas Petschner, who brought the qualification to New Zealand from the German university, believes the medical clowning profession was “just exploding” with 600 students already signed up for 2014. The tally includes 20 New Zealanders.

In 2009, Petschner established Clown Doctors New Zealand. He has trained and sent “clown doctors” to hospitals in Christchurch for more than four years.