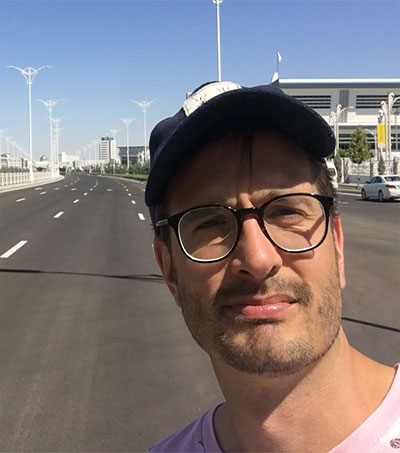 David Farrier Flies into the City of the Dead

“The capital city of Turkmenistan [Ashgabat] is blisteringly dry and hot, dumped in the middle of the desert. It also holds the record for the highest density of buildings made from white marble, which bounce the sun right back in your face, blinding you,” Dark Tourist host New Zealander David Farrier writes in an article about the city for The Guardian.

“While researching [Dark Tourist] I’d been told that Turkmenistan was ‘the new North Korea’, a bucket list destination for the daring traveller. I’d heard that the hermit kingdom bordered by Kazakhstan, Uzbekistan, Iran and Afghanistan had an egomaniac leader who hated animals and had an atrocious record with human rights,” Farrier writes.

“Turkmenistan doesn’t exactly embrace a free and open press, so when I entered the country last September, I did so under the guise of a sports reporter. Somehow Turkmenistan had negotiated to host the Asian Indoor and Martial Arts Games, an official Olympic event for which it constructed a $5bn village. Huge stadiums, a monorail system, indoor and outdoors sports arenas and giant sprawling highways were surrounded by brand-new hotels, apartments and malls.

“Walking around Ashgabat, blinded by an ocean of marble, I felt terribly alone. Athletes limped around, watched by security watched on, but this was no Rio, attended en masse by the public. It was very, very quiet. I could see why locals were said to call it the ‘city of the dead’ under their breath.

“This was a new city that didn’t know how to cope with anything that wasn’t preplanned. Our crew had experienced it all week – just navigating the Olympic Village was fraught with frustration and nonsensical bureaucracy. Guides steered us where they wanted to go. It was illegal to leave the city limits. Public transport made no sense. There was only one way to do anything.”