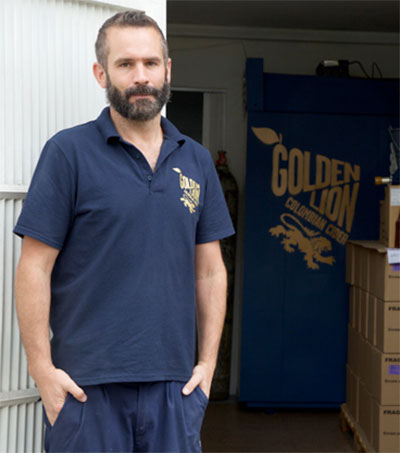 In a converted garage, tucked away amongst the low-rise buildings of Bogota’s Barrio Rionegro is the headquarters of Golden Lion Colombia Cider, the brainchild of New Zealander Daniel Hill and Jairo Andrés Venegas.

Their idea is daring, determined and inspired, but the challenge is enormous – to be the first people to produce cider in a country obsessed with beer.

Standing next to four 220-litre fermenters, the pair express their excitement and anticipation for the launch next month – a venture that has been around 18 months in the making.

“We have invested a lot of time to ensure we have a high-quality product; it’s a relief to see it all come together,” explains Hill, who first arrived in Bogota as a contractor for the Colombian air force.

He began brewing small batches of beer at home in New Zealand 13 years ago.  Every week he would make 40 litres of lager, Indian Pale Ale and even stouts for his friends, an experience that would later prove useful over seven thousand miles away in Colombia.

“First we want to prove the product … then we will be interested in expanding and potentially branching out to other cities across Colombia and other countries,” Hill says.