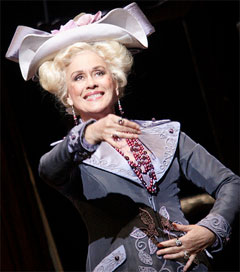 Dame Kiri Te Kanawa has returned to Covent Garden after 17 years for performances of Donizetti’s comedy La Fille du Régiment in the role of the Duchess of Crackentorp.

Te Kanawa celebrated her 70th birthday performing in the first opera she saw at Covent Garden. “It will [also] be my last performance – certainly in opera,” Te Kanawa said in a Royal Opera House interview prior to her performances.

“My first visit was literally coming into the Royal Box. I was invited through the [London Opera Centre] to come with our director to watch The Daughter of the Regiment [La Fille du Régiment] – of all things – and watching Pavarotti and Joan Sutherland singing the two main parts!”

The usually non-singing role of the Duchess, previously taken by Dawn French and Ann Widdecombe, has been expanded in this production to mark Te Kanawa’s return so the soprano can sing the arietta O Fior del Diorno from Puccini’s Edgar, written half a century after Donizetti’s opera.

“Bel canto purists will doubtless disapprove, but most people won’t give a damn,” Guardian reviewer Martin Kettle wrote. “Te Kanawa is operatic royalty and, especially for those who heard her in her prime, it’s a joy to welcome her back.”

La Fille du Régiment is on through 18 March.