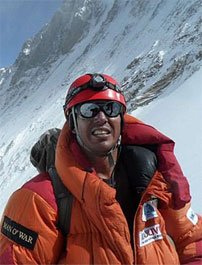 Former New Zealand wicketkeeper Aucklander Adam Parore has reached the top of Mt Everest. Parore, who represented New Zealand in cricket for more than a decade, climbed the world’s highest mountain to raise funds for the Make-A-Wish Foundation. “It hasn’t really sunk in yet to be honest … the physicality of it and the sheer physical and mental commitment to make the top,” Parore said. “But what a view mate.” Parore left New Zealand on March 27 for Nepal to spend a month acclimatising at the Mt Everest base camp before trying to climb to the summit. Since May last year he has been scaling some of New Zealand’s and the world’s highest mountains to prepare for the climb.