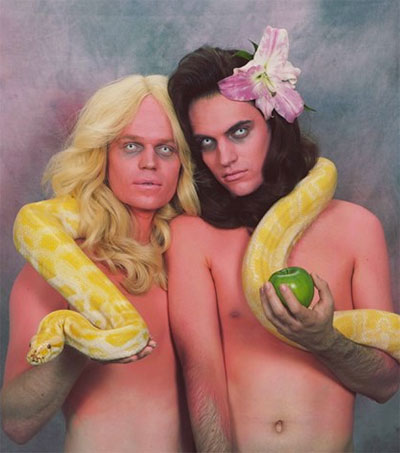 Connan Mockasin “a recluse from New Zealand” and Sam Eastgate of UK band Late of the Pier have teamed up to form Soft Hair, “a reverie of swampy psychedelia”, writes NME journalist Ben Homewood in a review of the duo’s self-titled new album.

“Although this is their first album together, the pair actually met in 2008 when Mockasin supported Eastgate’s old band, the cult day-glo indie boys Late Of The Pier. The shy, reclusive pair struck up a collaborative friendship and began a five-year-or-so recording process,” NME’s Ben Homewood writes.

“Both have released solo records in the meantime and although Eastgate pursued a dancier direction with his LA Priest project, both men share a gloopy, psychedelic sound.

“Their songs together squelch rather than thump, as evidenced on ‘Soft Hair’. Recorded in patches across Europe and New Zealand, the eight songs here don’t so much start and stop as undulate like the chest of someone in a deep sleep. Loungey opening pair ‘Relaxed Lizard’ and ‘Jealous Lies’ initiate a deep, watery groove and introduce Mockasin’s feline mewl and Eastgate’s deeper vocal.”

A recent Guardian review of these “kings contemporary kooks” further describes the sound of Soft Hair:

“The pair, as if high on brotherhood and hallucinogenic chemicals, leer and loom around tin foil rooms, leaders of a pioneering psychedelic slow jam movement and makers of semi-pornographic scenes in which nobody is turned on but the shower.”