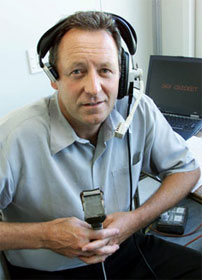 Coney Lights Up The Stage

Ex-New Zealand cricket captain and stage lighting designer Wellington-born Jeremy Coney, 59, lights up a London production of The Leisure Society, starring former British model Agyness Dean. “An air of glamour surrounds this French-Canadian import by François Archambault. The cast … is glamorous. The audience is glamorous. And the play itself has an air of boulevard chic. Even the lighting [by Coney] adds to the atmosphere of glamour,” Guardian theatre reviewer Michael Billington writes. Coney was one of New Zealand’s most successful batsmen. He only lost one Test series as captain, against Pakistan away, and he became Wisden Cricketer of the Year in 1984.