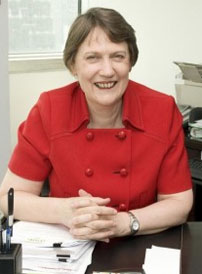 United Nations Development Program (UNDP) administrator Helen Clark has said that China can play a rebalancing role in the current global financial crisis to combat future global poverty and that one of the greatest challenges to eliminating poverty is to avert a global recession. “China’s domestic demand needs to go up to rely less on exporting. In the rebalancing, China has to import more,” former New Zealand prime minister Clark said. “As China strives to achieve even more impressive human development outcomes through its renewed emphasis on the quality of growth, it will also be setting an example for the world.” Clark was officially was officially sworn in to her current position by UN Secretary-General Ban Ki-moon on 27 April 2009.