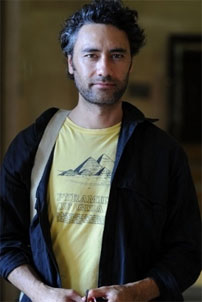 Director of acclaimed film Boy Wellingtonian Taika Waititi was part of a large New Zealand contingent who worked on comic-book blockbuster Green Lantern in Los Angeles, starring as aircraft engineer Thomas Kalmaku, best friend of the movie’s reluctant hero, played by Ryan Reynolds. Green Lantern is directed by New Zealand-born Martin Campbell and also stars Temuera Morrison as alien Abin Sur. Ngila Dickson is the costume designer and Grant Major the production designer. Waititi says he couldn’t resist the role. “I loved messing with planes as a kid so it was like being a big kid again,” he says. Waititi is currently directing an MTV remake of hit British TV comedy series The Inbetweeners. Green Lantern is in cinemas now.