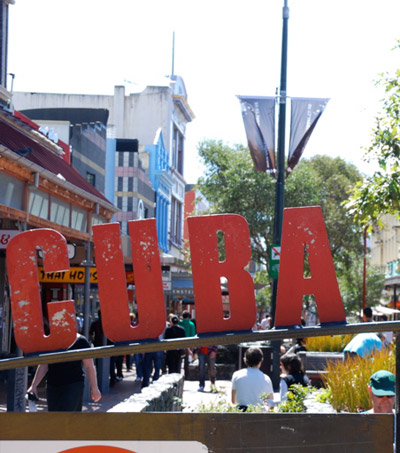 Wellington is featured in National Geographic’s “neighborhood guide to the best eats on (almost) every continent” as the best city for food lovers in Oceania.

Best Neighborhood for a Food Frenzy in Wellington:

“Wellington’s Cuba Street is the city’s hippest stretch, home to trendy restaurants, cool bars, and hidden gems,” according to the article. Try Matterhorn “a self-described “scene of assembly for Wellington’s creative cognoscenti”, “Logan Brown, an eco-friendly fine-dining restaurant in a former National Bank of New Zealand building” or Olive, which “is a feast for the eyes as much as the palate—sample Mediterranean fare in its tropical courtyard.” For those who like it weird, try laundry – “a bar and restaurant that retains the exterior appearance of its former life as a dry cleaner.”

National Geographic recommends colorful Maranui Café, which “serves up some of the area’s best coffee, along with light dishes (many vegan) and milk shakes, right on the water,” “Spruce Goose, a restaurant in a repurposed airport building with views of both the runway and Lyall Bay” and Lyall Bay institution Seaview Takeaways.

For the freshest produce, meats and seafood head to Wellington’s waterfront. The city’s Harbourside Market “has dozens of stalls (selling everything from spice mixes to flowers) and eateries (burritos to barbecue)”; its Underground market is a “showcase for bakers, designers, and artists”. The nearby Wellington

Sea Market on Lambton Quay (there’s also one on Cuba Street) is the place to go for freshly caught fish.

Other cities the article identifies as food paradises are:

To read more about the individual neighbourhoods recommended in the article please click here.